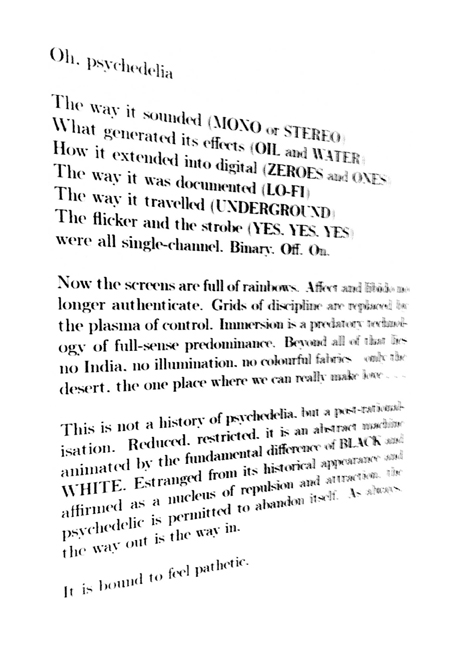 The way it sounded (MONO or STEREO)
What generated its effects (OIL and WATER)
How it extended into digital (ZEROES and ONES)
The way it was documented (LO-FI)
They way it travelled (UNDERGROUND)
The flicker and the strobe (YES. YES. YES.)
Were all single-channel. Binary. Off. On.

Now the screens are full of rainbows. Affect and (libido?) no longer authenticate. Grids of disciplines are replaced by the plasma of control. Immersion is a predatory technology of full-sense predominance. Beyond all of that lies no India. No illumination. No colorful fabrics – only the desert – the one place where we can truly make love.”  —– Dexter Bang Sinister “Black And White Psychedelia”

21st Century Psychedelia feels like a bit of a missed opportunity, while also detailing the complex, bifurcated nature of an interconnected digital existence. On the plus side, we have more access to psychedelic culture than any other time in History, apart from maybe the height of Pagan Greece, where psychedelic carnivals were the mainstream. More people are exposed to psychedelic art and culture than ever before, but that is also part of the problem. Once an idea escapes the grips of the slipstream, there is a certain distortion which occurs, degrading as a copy of a copy of a copy, losing weight and heft along the way, until it is a ghostly parody of itself.

In the case of psychedelia, what has the potential to be truly AWEsome, in the original sense of the word (read: shitting yrself in terror, trembling in the face of THE INFINITE MYSTERY) instead is codified into a chain of cheap tie dyes, chintzy head shops, and over-the-counter substances of questionable quality and safety.

Psychedelia and psychedelic art, in general, is defined as either “trying to recreate or reflect the experience of altered consciousness.” Note, they don’t specify which altered states. From the wide-open terrain of human consciousness, psychedelic art and music has been reduced to the colorful shapes and visual distortions of the 1960s, most commonly referencing the effects of Cannabis, LSD, Psilocybin, and Mescaline. While the latter three can be rather earth-shattering, all of these headsplitters are rather known and familiar, at this point, and not exactly revelatory, (although they are capable of great revelations). This reductive reading overlooks the visionary states of less-wholesome substances, like cocaine and its derivatives; opium and its descendants; and a whole shopping list of designer alphabet drugs like DXM. That is not even to mention the terror-inducing meltdowns of mental illness or sleep deprivation.

By way of illustration, check out this rather sinister psychedelic short film from director Larry Carlson, “Contact The Star People”, with its conspiracy-laden, consciousness-expanding mixture of cheap sci-fi; avant-garde experimental art; and trippy visuals, all combining to approximate the manifold myriad levels and layers of existence. It’s also a great example of how real wisdom can mingle with pseudo-science and paranoia, requiring a fine-bristled brush to delineate truth from fiction, grandiosity from great wisdom. After all, perhaps people suffering from paranoid schizophrenia just have an advanced understanding of the world, and all its complex systems, and an inherent understanding of the role we play in creating the world we inhabit. We are all Gods, all world-builders. 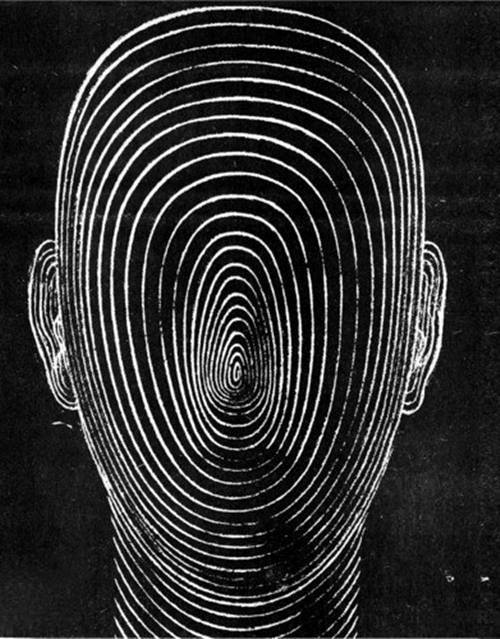 “We are all Gods, all world-builders.”

Long story short, if psychedelia and psychedelic art are simply comforting and comfortable, it’s not really doing its job very well. After all, psychedelic art contains both the whimsical worlds of Dr. Seuss, as well as the subjective, post-modern shamanism of Lewis Carroll; the biomechanical terror of H. R. Giger; the religious awe of Hieronymous Bosch; the eye-crossing infinity of M. C. Escher. It should take you off the grid, drawing new maps that contain the dragons, mark the wild things, locate hidden cities of gold and show hidden wisdoms with a lurid red X.

The Sound Of Stereo No Aware from Portland ‘experi-mental POP’ outfit Stereo No Aware is one such treasure map, taking us on a journey into a shifting, senseless dream realm where you are not you – or, you are, but not for long, or for certain.

Stereo No Aware play a surreal style of art pop, including everything AND THE KITCHEN SINK, from jangling, winsome acoustic folk; to retrodelic, rinkety-dink drum machines, like a dream of ‘70s roller rinks; vitriolic indie guitar rock; polyrhythms; and personal lyrics – frequently in the same song.

These jump-cuts and sharp juxtapositions are The Sound Of Stereo No Aware’s most striking feature, like when the bottom drops out on album opener “Passing For A Ghost”, when discordant math rock guitars give way to a breezy, nearly middle-eastern Reggae vibe, unexpectedly and without warning. Or perhaps the vaguely ominous “Yareta Yorona”, approximating what it might sound like if Fantomas were to cover The Velvet Underground’s “The Gift”.

Apart from the jarring juxtapositions, Stereo No Aware live up to their tags of ‘weirdly relaxing’ and the rather basic ‘dreampop’. In many ways, Stereo No Aware are simply a very talented, highly enjoyable guitar-oriented indie band, along the lines of Pavement, Modest Mouse, with a little bit of math rock sparkle, a la Don Caballero or Omar Rodriguez-Lopez’s solo material. The closest, most apt comparison would have to be The Olivia Tremor Control, however, and perhaps The Elephant 6 Collective as a whole. The Sound Of Stereo No Aware possesses a similar kind of dream logic to The Olivia Tremor Control’s Dusk At Cubist Castle, combining retrodelic production and instrumentation, and songwriting; musique concrete bricolage; and sudden, unexpected jumpcuts in the songwriting, leaving one with the impression of flipping through someone’s dream journal, at random (or, wait, maybe that was just the dream itself).

Neutral Milk Hotel’s Jeff Mangum was still a member of The Olivia Tremor Control during Dusk At Cubist Castle, we must remember. Neutral Milk Hotel are another fine example of the dark side of psychedelia, with In The Aeroplane Over The Sea calling on ghosts, the holocaust, sexual obsession, and the holocaust, as Mangum lived in closets and dark basements, culling the lyrics from the ether as he combed cobwebs out of his wild hair. Even during the heights of crisis, however, NMH still sounded like a chic, cosmopolitan French jazz band, creating some truly nightmarish and also third-eye-opening vistas, that have probably done more to introduce new generations to the dark delights of psychedelic music and art, and the implications for visionary, subconscious explorations and new dream states. Neutral Milk Hotel, themselves, are almost victims of the cutesy reductive reading of psychedelia (and, perhaps, we might extend that to ‘indie culture’ as a whole, in the 21st Century), becoming the poster children for far out indie folk. We can’t help but wonder how many of the ukulele-wielding, “Oh Comely”-worshipping indie kids have really dug into the layers of time travel; necrophilia; erotic obsession; oedipal neuroses; drug addiction; sleep deprivation; ego annihilation; loss of identity; and all those other things we both love and hate about psychedelic experiences.

As a kind of boutique New Age Spirituality industry emerges, with wealthy, beautiful tourists taking $10,000 vacations to somehow have their egos bolstered with ayahuasca, the need for real, authentic psychedelic music and art have never been more necessary. As with psychedelia, humanity as a whole are facing a weird split, in the wake of the datastream. We’ve never had more information available, from so many different places. The sheer over-abundance of perspectives is causing many to just shut down entirely, going online merely to reinforce what we already think and know. Seeing as how a huge percentage of our daily interactions all happen via mediating screens, however, this is a problem. It’s time to get uncomfortable.