Much like the horror genre, or most forms of extreme music, it’s a wonder that anyone listens to doom for fun. As Kim Kelly wrote recently for Noisey, speaking about the newest full-length from Salem, Or.’s HELL, “Right now, as you read this, two sad, stupidly powerful men feint and jab at one another, flaunting nuclear arsenals like toys and holding the fate of the planet in their vulgar fingers.” Kelly goes on to comment on HELL’s appeal, in these troubled times, “By enveloping myself within HELL’s radium-bright notes, agonized howls, and ominous dirges, it’s almost like I’m inviting the unthinkable… or the inevitable, depending on which side of the nuclear divide our current administration deigns to drop us.”

Whatever the motivation, the fearsome din from the mysteriously monikered MSW, out of the ancient primevil forests of Salem, Or. sounds damn fucking fine in these troubled times. HELL’s trademarked pyroclastic flow of brutal bass tones washes over you like the final moments of Pompeii, while shrieking guitar feedback comes over like the dying stars falling out of the sky, while the drums pound like the Five Armies converging on Lonely Mountain.

That Tolkien reference is no coincidence, as HELL carry a lot of the good time vibes of classic doom merchants like Sabbath or Kyuss, with all of the geeky mythological religiosity. The classic doom and sludge is well in evidence, on HELL’s fourth self-titled LP, with massive (and massively catchy) riffs that get stuck in your head, while bludgeoning you to the dirt like a cyclop’s club. Unlike a lot of classic doom, however, HELL’s doom is low-down, dirty, messed up, and disturbing, rather than the cartoonish caricatures of Black Sabbath, Count Raven, Witchcraft, or Saint Vitus (not that there’s anything wrong with that). HELL’s down-tuned, cacophonous sludge is spiked and studded with windy black metal and harsh noise, as well as moments of breathtaking beauty, like the striking orchestral fade-out of “Victus”.

MSW favors a raspy, wraithlike vocal style, much more Mayhem than Metallica, heard in fine effect on tracks like the “Sub-odin,” or in the grunting, shrieking invocation of “Inscriptus,” one of Hell’s most scorching moments. MSW’s gowlin yowl is much more bone-chilling and spellbinding than much of doom’s Cookie Monster death metal grunts or Freddy Mercury operatics.

“SubOdin” also boasts some of the finest blackened guitar work of the record, of the windswept Explosions In The Sky-style post-rock/metal, distant, dreamy, gauzy, beautiful, and emotional, as if viewing the world through a veil of mist. The gracefulness erupts with next track “Machitikos,” which is a straight-up flying fretboard shred-a-thon, acid-fried pentatonics at the speed of thought that would do Hendrix proud, over a crunchy, thudding headbanging beat. Monolithic and groovy, it’s all that is good and unholy about DOOM.

The raspy vocals and multivalent guitar textures are some of what really separate HELL from the imitators, those lacking in imagination or creativity. MSW switches it up constantly over Hell’s too-brief seven tracks. The blasts of buzzsaw black-metal power chords and delicate, shooting star leads punctuate the ominous heaviness of doom’s crawling-through-the-dust pace. So many funeral doom records get caught up in their 70 bpm headspace, and never relent. While one can appreciate 70-minute of bleak, hopeless downtuned guitars and skull-punching drums, it can get a bit homogenous at a certain point. Like watching a bunch of Gaspar Noe films on loop, we get bludgeoned to death, numb, jaded, and disaffected.

And while there is a time and a place for that, and i can certainly get down, i get enough of that in my daily life lately, reading the news. HELL reaches across the void, delivering their despairing message. The stars are aligned for us to receive, to really listen and hear. The news might be grim, but it’s not all bad. HELL promises it’ll be a hell of a party, even if we do go up in flames. 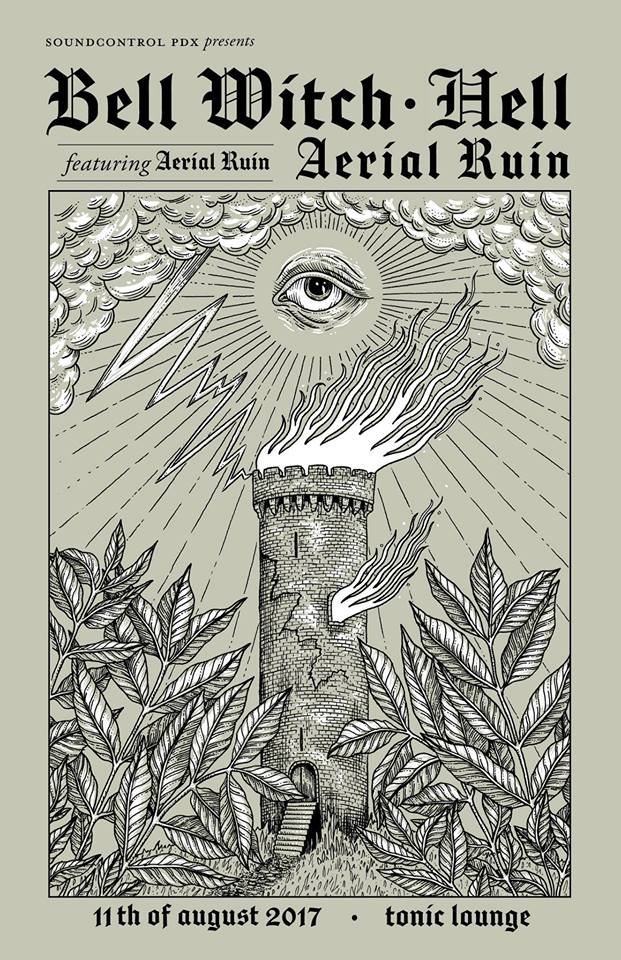 Hell is out today, co-released by Sentient Ruin and MSW’s own label, LowerYourHead.