One of the two guitar players in the band.

He and the other more well-known guitarist Tom Verlaine took turns taking solos when the band played or recorded. The solos are credited in the liner notes for both of the band’s original two albums, Marquee Moon and Adventure. Despite that simple fact (and the songwriting credits) what is never made clear to the listener is what an integral part Lloyd played in the sonic construction of each song. He was the sinew and the strength on which each songs was constructed. He attacked the melody and drove it home.

He was the heart of the Television engine.

This was only made clear to me by seeing the band perform live during a 1992 reunion tour. I was a bit shocked to see and hear Richard Lloyd plays riffs and refrains in the songs that I had in my mind attributed to Tom Verlaine. Mister Verlaine for the most part played rhythm guitar parts so he could sing and took the occasional closed eyed solo.

In the meantime, in each song, all of what I considered to be signature little bits and hooks were sent flying into the air and our ears from the fingers of Richard Lloyd.

Television is not a jam band, not a groove band. They are a band that builds on a solid foundation of interlocking guitar riffs. one guitar playing a part, while a second guitar plays something that compliments or fills in from what the first guitar part has not played. Thus filling the space over a steady beat by the drummer and bass player. By this measure Richard Lloyd was the more important guitar figure in the band, as he was the one responsible for many signature parts throughout the songs, while Tom Verlaine was often playing rhythm guitar, singing lyrics, and then coloring songs with an unusual solo.

On the occasion when Lloyd took a guitar solo, as in “See No Evil”, the lead off track from the album Marquee Moon, it is a burst or explosion of pent up force, peeled off of taut strings.

After the band’s second record Adventure the band faded out somewhat and broke up.

Both of the guitarists recorded solo records in 1979– Tom Verlaine’s album being somewhat reminiscent of Television, featuring a couple of songs that the band had performed live but had never recorded in the studio, while Lloyd’s solo album, entitled “Alchemy” was a bit of a departure, a bit more poppy than one might have expected.

It was not until 1985 that the integral part of his partnership with Tom Verlaine began to be apparent to myself, with the release of his second solo record Field Of Fire.

It is an album strewn with interlocking guitar parts, riffs built upon opposing riffs, and ripping muscular solos, a definitive piece of work by a musician on sure footing with his past efforts in his prior band, embracing what he had built in the past, and owning it. I came to understand over the years with subsequent albums, and seeing Television perform reunion shows, that every aspect of “Television-esque” guitar on his solo records was not derivative, but original, as he was in fact the instigator of what I have come to know as a style.

I am happy to say that he has been quite a bit more prolific than his former band mate, having released a number of solo records (one of which is the Jimi Hendrix covers album The Jaime Neverts Story), plus he has been a guitar player for hire for the likes of Matthew Sweet and reformed Cleveland pre-punk legends Rocket From the Tombs, taking the place of now sadly deceased Peter Laughner. 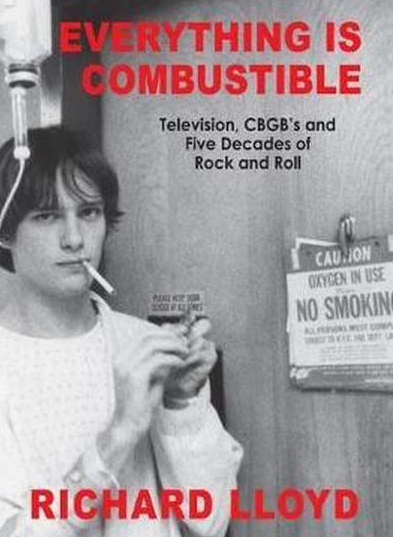 On October 24th 2017, his memoir Everything Is Combustible was published and placed onto retail bookstore shelves. As I write this piece, I am about one third finished with the book. It’s a  truthful document of a unique individual, whom I am pleased to say has made me happy hundreds of times over with his recorded legacy. An influence that has been felt all around the world by virtue of his key part of being the band in the early CBGB’s scene, which went on to include The Ramones, Blondie, Talking Heads, etc. The force of this music inspired or influenced kids in the U.K. to form bands such as Sex Pistols, The Clash, Subway Sect and the Buzzcocks, as well as inspire the likes of Echo & The Bunnymen, R.E.M. and many more bands.

Marquee Moon consistently places on lists of the greatest rock ‘n’ roll records, or lists of best debut albums, and will no doubt continue to be discovered and re-discovered as long as there is music.