PICA’s Time Based Art Festival (TBA) 2018 had the privilege to host a lecture by the multifaceted artist Vaginal Davis. Davis is a black punk feminist evocative innovator and teacher who specializes in terrorist drag. She is biracial, intersex and from South Central Los Angeles, and was raised in a matriarchal household. She does not have a license to drive; she is a performance artist, visual artist, musician, producer, director, social antagonist and author who helped pioneer and mother the homo-core punk and gender-queer arts movements. She is the writer and publisher of zines: Shrimp which focuses on licking bigger and better feet, plus Fertile Latoya Jackson with tips on makeup plus stories with scandal and gossip. Her bands include Pedro Muriel and Esther, Cholita!, Black Fag, The Afro Sisters and The Female Menudo.

Davis has labeled herself as “sexual repulsive,” refusing to conform to conservative assimilation tactics imposed by corporate gay culture. She has made her own biography within gay and black identity politics, barreling through stereotypes and challenging heteronormative and LGBTQIA+ binaries. By using punk music, self-mockery, inciting sexual revolutions in art and film, Davis rails against assumptions that inhabit heterosexual and queer culture plus her own Black and Hispanic identities. Davis is an instigator in keeping an open running narrative against propagating appeasement and appropriation by the mainstream over individuals’ rights to their own freakiness (Johnson, 2017).

At PICA, Davis presented some of her short films mentioned below. She provided commentary to enable better understanding behind the processes that inspire her art. Her films are politically, ironically and truthfully grounded in the experience of lived individual oppression/s endured by herself and gender-queer community, which protests the established institutions behind race, gender and sociocultural politics. She has inspired filmmakers Bruce LaBruce and Woody Allen; late queer theorist Jose Esteban Munoz; and had a lesbian love affair with Gwyneth Paltrow before Paltrow married that guy in Coldplay. Davis attributes her name from being inspired by activist Angela Davis and being the first person in her family to graduate college. In college, Davis studied Angela Davis and the Black Panther Party which inspired her militant counteridentification within the dominant culture. In the 1980’s she enacted her first performance with two white women with afro wigs named the Afro Sisters. The performance “We’re Taking Over” focuses on the Sexualese Liberation Front who kidnaps the white corporate leaders of America so they can assault them anally with black dildos and hold them for ransom. Many audiences in L.A who frequented the clubs where she performed were middle-class postpunk crowds and they were not privy to the camp element of Davis’ performance art. Audiences were often offended which had no effect on Davis at all.

That Fertile Feeling (1986) follows the plight of the Afro sisters. The film depicts Fertile Latoya Jackson’s barriers in accessing health care for pregnancy and contraception services in the U.S. Jackson gives birth to “eleventuplets” at their friend’s house after being turned away from the hospital because she does not have any health insurance. Davis relayed her concerns for women and trans women who feel they have to conform to established female binaries and societal pressures upon women in giving birth which is considered womanly. The established patriarchal society in the U.S keeps women subordinate and marginalizes low income women who are predominantly women of color or trans, by providing lesser accessibility to health insurance, access to abortion, emergency contraception and pregnancy planning options. The film ends by expressing Jackson’s resilience after delivering 11 babies, with assistance from Vaginal Creme Davis, with scenes showing Jackson skateboarding outside and landing ollies post-delivery.

The White to Be Angry (1999) was initially a stage performance and later a short film. Davis plays a black woman who undergoes racial and gender reconstructive surgery to become a white supremacist bearded bald male. She becomes Clarence, a boy in drag, dressed in military fatigues with a military cap and a long gray ZZ Top beard. Davis presents as Clarence in whiteface makeup. Clarence introduces himself in Davis’ high pitched voice explaining how white supremacists are “hot” and that’s why she reassigned herself. As she adjusts to her new objected identity of desire her voice drops. Themes of cross-racialization and cross-gendering provides a radical cultural critique as miscegenation continues to pervade white sexuality; cross racial desire in communities of color is not as pervasive. Clarence’s character solicits or needles the fears of white supremacy groups as espoused in paranoid beliefs, like the idea that people of color are infiltrating their purity. Davis highlights the absurdity of white supremacy as being superficial or only skin deep (Munoz, 1997). Davis explained there was a time she tried to convert a suburban neo Nazi with “psychosexual conversion therapy.” Being a seasoned performer, she hooks the audience saying she will go into detail about this on “another day,” inviting curious audiences to check out the film and her album. “The White to be Angry” was produced by Steve Albini and performed by Davis’ band, Pedro Muriel and Esther.

Davis also shared her critique about black mainstream and non mainstream films by using two films: Mandingo directed by Richard Fleischer; and Petey Wheatstraw, directed by Cliff Roquemore and starring Rudy Ray Moore. Davis asked the audience at PICA to say “Mandingo” three times for emphasis. Davis played a scene from Mandingo where Gaynemede or “Mede” who is a slave, star boxer and well-endowed, has a sexually aroused gaptooth middle-aged white female pilgrim hanging off his leg. Mede is standing in a public square waiting to be bought. Davis’ critique of Mandingo focused on black sexual stereotypes. She addressed derogatory sexual stereotypes depicting well-hung black men and subordinate black women who are pleasure slaves to their white masters. She explains films like Mandingo are made by white “fascist” directors and continue to perpetuate ideals of oppressive colonialist toxic masculinity upon people of color. 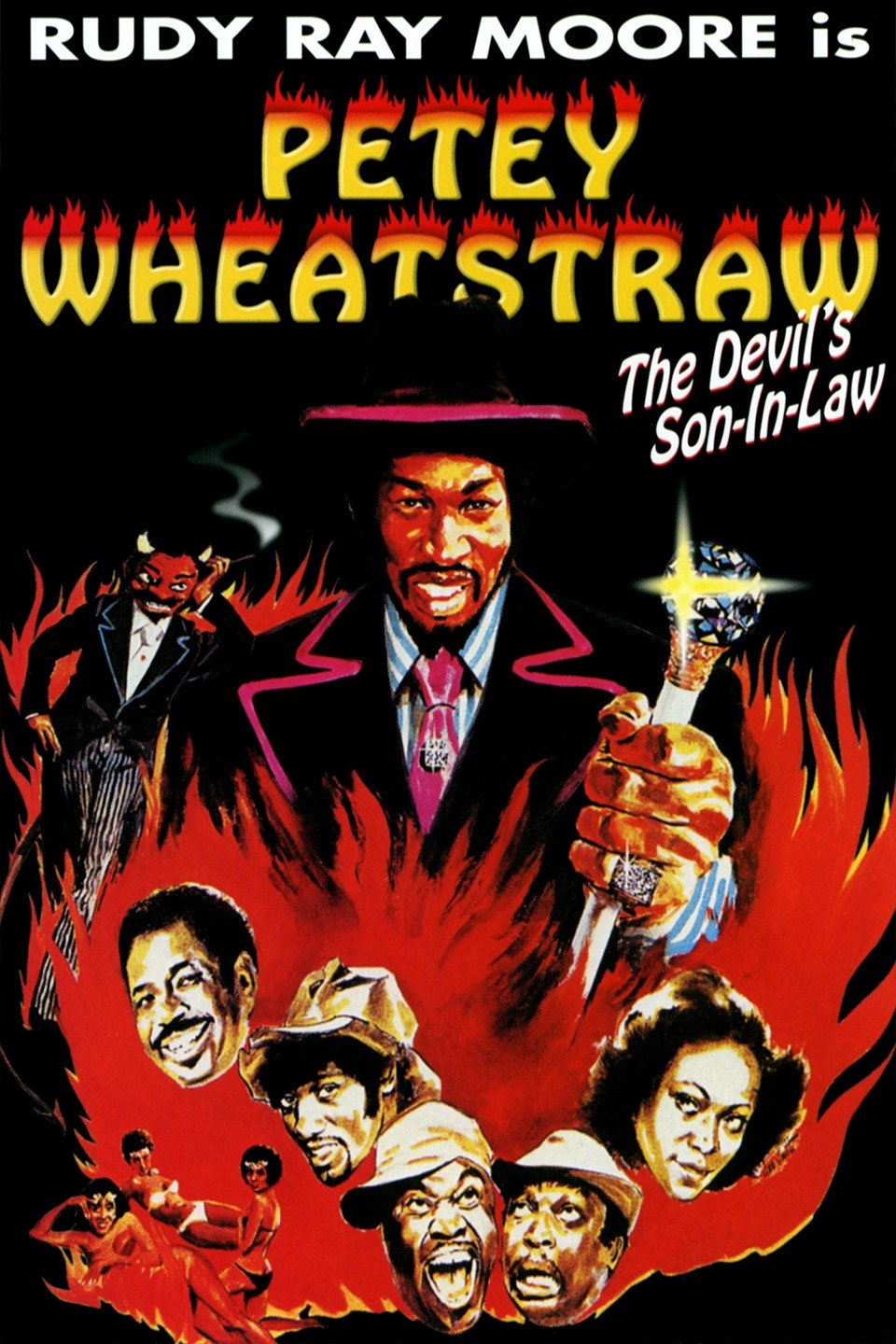 Contrasting Mandingo, Davis played the opening scene from Petey Wheatstraw: The Devil’s Son In Law, directed by Roquemore who is an African-American director known for blaxploitation films. Petey Wheatstraw relates a parody of the black experience based on lived oppressions stemming from U.S colonization. Davis explains blaxploitation films are a more honest portrayal of the American Black experience because black people and minorities have had to be entrepreneurs and creators of their own opportunities to enable upward mobility. Petey Wheatstraw’s character provides his own success by becoming a successful nightclub comedian. In the opening scene we see Petey Wheatstraw portraying a common conception of espoused black distrust of U.S medical institutions, showing Petey attacking a white doctor as soon as he is born. Petey is born with a diaper on as a 6 year old who is able to talk and express his discontent. His mother disciplines Petey after he attacks the doctor and his black father by naming him Petey Wheatstraw.

Professor Davis merges art and humor, taking public discourse to a Dementia 13 level. By forming new notions in language to present her experience and intersectionality, she is much like a bull crashing in a Madame-Mua china shop, levelling notions of propriety and reality (vaginaldavis.com). Become a fan, write her a letter, and she promises to write you back if you send a self addressed envelope http://www.vaginaldavis.com/. Davis is an important figure because she enables open conversations through art and critique about race, gender, sexuality and cultural politics.

Munoz, Jose Esteban (1999). Disidentifications: Queers of Color and the Performance of Politics.