Fans of country-rock won’t be strangers to Clarence White’s name. In addition to earning the distinction of second longest-serving member of the Byrds – just after Roger McGuinn – White’s driving guitar and mandolin graced dozens of essential ‘60s and ‘70s albums. He can be heard alongside everyone from Lee Hazlewood to Linda Ronstadt to Phil Ochs to the Everly Brothers, often wielding the Telecaster he modified with a mechanism designed to simulate the sound of a pedal steel.

But the strangest credit on his extensive discography is a 1969 private press LP called Housewife, written and recorded by unknown artist Mary Afton. Performing as “Mistress Mary,” Afton appears on the album cover in languid Old Hollywood pose, with handwritten liner notes that label her music as “country-western, some soft-soul, some whatever.” How Afton got one of the greatest session guitarists of all time to play lead on her first and only record remains a mystery – but the quality of White’s playing elevates each unconventionally sexy, often drily funny song and makes Housewife rise above other private press recordings of the era.

“And I Didn’t Want You” is the standout track, although “The Bible Says,” “Praise Me A Little Bit” and “Dirt Will Be Yer Name” hold up well and capture Afton’s wry tone and unconventional vocal stylings. It’s a debut that showcases a distinctive artistic vision, and you can easily imagine Afton evolving in a way that would have earned her a more recognized place in the LA country-folk canon. Instead, she walked away from the music industry after Housewife to teach car mechanics, self-defense and belly dance classes for women before making a successful living as a disco dance instructor.

Housewife surfaces occasionally on Discogs for $200-$300 – it’s hard to say if any of those copies are the one Afton sent Elvis personally.  For those of us on a more limited budget, Light In The Attic reissued the record in 2016 after the Numero Group included “And I Didn’t Want You” on their compilation of private press country recordings, Wayfaring Strangers: Cosmic American Music.

Afton’s liner notes identify her as a “wife – mother – civic leader – etc. – artiste” (with accompanying glamour shots), but Mistress Mary can be remembered a songwriter above all. Whether Housewife would have its cult status without Clarence White’s involvement is debatable, but fans of freak folk, Americana and Laurel Canyon will do well to give it a spin. 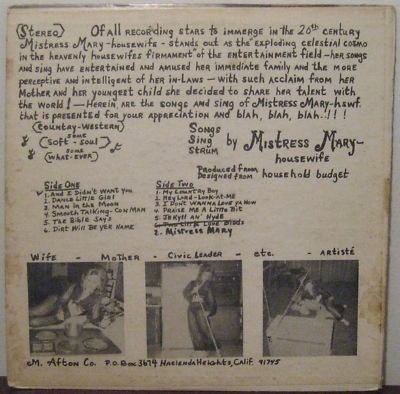 Rachel Good is a Portland writer, singer and DJ. As DJ Stonebunny, she can be heard on Freeform Portland every other Saturday from 6-8pm with “High Rollers in Sin City,” an exploration of weird psychedelic country and folk from the ‘60s and ‘70s.